Temperatures continue to plummet Wednesday, and after Tuesday's snow, many roadways have refrozen.

Watch for slick spots Wednesday as wind and dangerous cold move into the region.

Wednesday will be sunny, windy and bitterly cold with highs in the 30s, but chills in the single digits and teens. Wind gusts could reach up to 40 mph.

The combination of frigid temperatures with Tuesday's snow, means refreezing on roadways, sidewalks and driveways will be a concern. 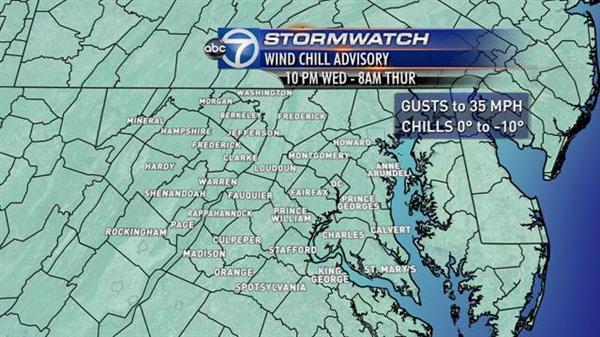 Thursday looks to be the coldest day of the week, with highs only in the lower 20s under clear skies.

"I think the temperatures we saw in the 40s [Monday] morning will be the warmest that it will be for the next seven days," says ABC7 Meteorologist Alex Liggitt.

The colder weather is caused by a disturbance moving out of Canada called an Alberta Clipper, Liggitt says. The weather is not unprecedented for the first week of January, he adds.

"Winter is finally upon us," Liggitt says.

Tuesday morning's commute was one of the worst in recent memory -- and Wednesday doesn't look to be a piece of cake either.

Cold temperatures in the forecast are refreezing wet, icy and snowy roadways, which could be trouble for drivers Wednesday morning.

“Go ahead and stay home [Wednesday] morning if you can,” she told WTOP Tuesday night. “… We’re not out of this yet.”

Morris says the cold temperatures Wednesday morning are going to create a lot of refreezing on roads that didn’t seem too bad Tuesday. And while the main roads are shaping up OK, icy side roads will remain a problem.

Not for lack of effort on VDOT’s part, Morris says. Crews were out Tuesday night treating overpasses and bridges, as well as sanding hills and subdivisions.

"We’ll stay with it until the roads are safe," Morris says.

In Maryland, road crews scouted out icy patches and worked to treat them overnight, says Charlie Gischlar of the Maryland State Highway Administration. Still, he advises drivers to slow down and be extra cautious Wednesday morning.

"If it looks wet, you want to slow down," he says.

Metrobus is operating on a normal schedule after it was on a moderate snow plan.

Get the full forecast on the WTOP Weather page.

Snow is not in the forecast for Wednesday, but Tuesday's accumulation can still be seen around the region.

Forecasts for Tuesday initially predicted 1 to 2 inches of snow, which was then expected to be 4 to 6 inches. But totals from the National Weather Service show that 2 to 4 inches dropped over the region. 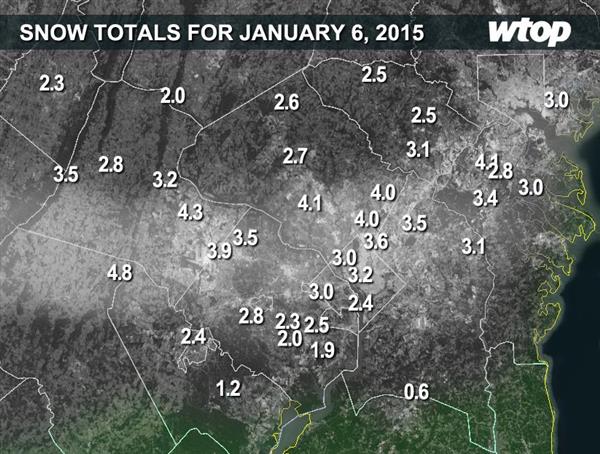