WASHINGTON -- Democrat Mark Warner has taken the lead in a razor-thin race with Republican Ed Gillespie for the U.S. Senate in Virginia.

Gillespie held the lead for most of Tuesday evening as votes continued to trickle in from precincts across the state. Tallies from voter-rich Fairfax and Virginia Beach helped boost Warner over his challenger.

Warner, a popular former governor, was expected to ward off Gillespie's challenge. Gillespie is the former chair of the Republican National Committee and a GOP strategist.

Although Warner gave a victory speech late Tuesday night, Gillespie didn't concede and said he would wait to see what Wednesday would bring. But the gap has widened as votes continued to trickle in.

Candidates may request a recount if the vote is within 1 percent in Virginia.

Gillespie ran neck and neck with Warner on a night that Republicans across the country snapped up enough seats to win control of the U.S. Senate and that saw a Republican win the Maryland governor's race.

On Wednesday, Gillespie's campaign says that they will be watching the post-election canvassing of results closely, the next step before the votes can be certified by the state board of elections. Any recount request would come after certification.

"We were outspent two-to-one and yet the most recent unofficial tally has us separated by less than a percentage point out of more than two million votes cast," Gillespie said in a statement. " It was an honor to run, and I will respect the decision reached by Virginia’s voters.”

Meanwhile, the Warmer campaign is confident that the Democrat will return to the U.S. Senate.

Regardless of the outcome, Gillespie's involvement in Virginia politics is likely not over. His showing against one of the state's most popular lawmakers has already put him at the top of the list for possible gubernatorial candidates in 2017.

Linda J. Killian, author and Washington journalist, says election results, including those in the Virginia Senate race, weren't an endorsement of the GOP agenda, but the result of unhappiness with Barack Obama.
by WTOP News

Wolf did not seek re-election in the district that stretches from McLean to Winchester. Comstock won 57 percent of votes, according to unofficial election results.

Congressman Gerry Connolly won 56.9 percent of votes to serve another two-year term, according to unofficial election results. The Democrat faced three challengers including Republican Suzanne Scholte who got 40.4 percent of the votes.

For the first time since 1983 a non-Democrat has been elected to the Arlington County Board. Former Republican, now independent, John Vihstadt handily beat Republican Alan Howze.

Vihstadt got 56 percent of the vote compared to Howze's 44 percent.

They faced off in a special election in April for a seat vacated by board member Chris Zimmerman and Vihstadt won that race 57 percent to 41 percent in April.

Vihstadt is a vocal opponent of the Columbia Pike streetcar project and the race was a referendum on the fate of the project.

With Vihstadt's selection to a full four-year term, three board members support the streetcar and two are against. The board has approved funding to pay for preliminary design work.

Fairfax County voters approved a $100 million bond referendum to pay for sidewalk, crosswalk and bicycle improvements. It's part of a larger transportation package board members approved in the spring. 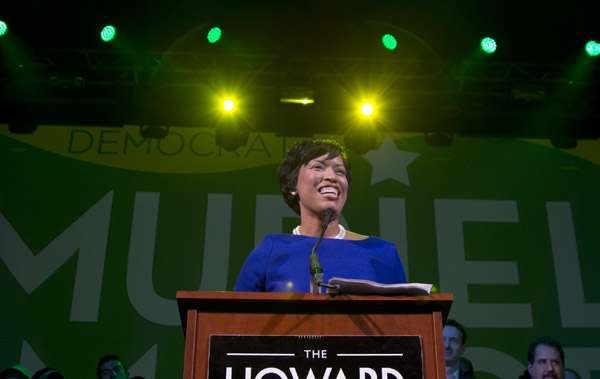 D.C. voters chose Councilwoman Muriel Bowser to serve as the city's next mayor.

Voters also approved, by large margins, a ballot measure that would legalize small amounts of marijuana for personal use.

And Karl Racine is the first separately elected attorney general in the District. He won more than 40 percent of the vote.

Through Tuesday night, Republican Larry Hogan maintained a sizable lead ahead of Lt. Gov. Anthony Brown, who was expected to easily win the race and succeed Gov. Martin O'Malley in the heavily Democratic state.

Behind by 92,000 votes as of midnight, Brown took to the podium to concede the race telling Hogan that governing is hard work and that he wished the governor-elect luck.

Hogan focused his message on the state's tax burden and attacked Brown for the bungled roll out of the states' health exchange website, which Brown oversaw.

Republican candidates for governor swept races in other states. 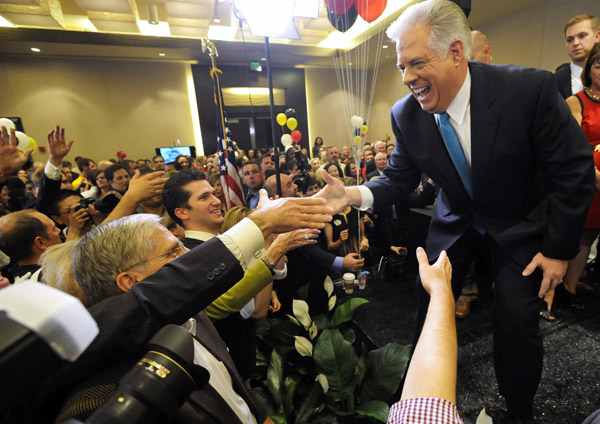