Governor on Trial
Holidays: 'Enchant' shines with millions of lights in Nats Park | Where to see holiday lights | Send in photos of decorations | How to give greener this season 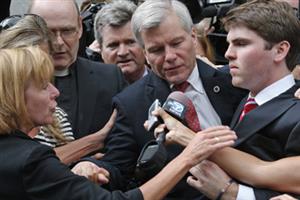 Former Virginia Gov. Bob McDonnell, center, is mobbed by media as he gets into a car with his son, Bobby, right, after he and his wife, former first lady Maureen McDonnell, were convicted on multiple counts of corruption at Federal Court in Richmond, Va., Thursday. (AP Photo/Steve Helber)
WASHINGTON - Former Virginia Gov. Bob McDonnell has been found guilty of 11 public corruption charges and his wife Maureen has been found guilty of nine charges.
The guilty counts include fraud and bribery in addition to public corruption after the couple accepted more than $177,000 of gifts and loans from a businessman.
The McDonnells now face decades in prison as each charge carries a maximum penalty of 20 or 30 years.
They were found not guilty on charges of making false statements.

Both Bob and Maureen McDonnell bowed their heads and wept as a chorus of ``guiltys'' kept coming from court clerk.

The McDonnells endured weeks of testimony that included sordid details about their personal lives and their rocky marriage. But the verdict is a shocking result for a governor with a squeaky clean image and who was once considered as a vice-presidential candidate. He now becomes the first Virginia governor convicted of a crime.

The couple left the courtroom separately and remained apart. Bob McDonnell left first and walked into a witness waiting room; Maureen McDonnell came out later, hugging one of her daughters while weeping loudly. She went into a separate waiting room.``This is a difficult and disappointing day for the commonwealth and its citizens. Public service frequently requires sacrifice and almost always requires financial sacrifice,'' said Dana Boente, the U.S. attorney for the eastern district of Virginia.The jurors all declined to speak to reporters as they left the courthouse through a back door. ``I just want to go home,'' said one unidentified juror.

The defense team said that the fight was far from over and that they would appeal.

The McDonnells were accused in a 14-count indictment of accepting gifts, trips and loans from former Star Scientific CEO Jonnie Williams
in exchange for promoting the company's products.
The McDonnells' marriage and Maureen McDonnell's mental state and behavior became
the focus as the trial progressed. The couple tried to argue that their marriage
was falling apart and they could not have conspired to cover up the gifts they
accepted from Williams.
Taking the stand in his own defense, McDonnell testified that he should have
reported the gifts and cash but that he wasn't intentionally hiding them from the
public. He also testified that he considered Williams a personal friend but that
his wife arranged many of the loans from Williams behind his back.
They will be sentenced Jan. 6.
Stay with WTOP for updates on this developing story.
The Associated Press and WTOP's Max Smith contributed to this report.
Listen Live
Not near a radio? Click here to listen live: http://bit.ly/sjB3au
Not in the immediate metro area? Try listening on 103.9 FM or 107.7 FM.
3rd & 7 37yd
3rd & 7 37yd
B
S
O
close
close