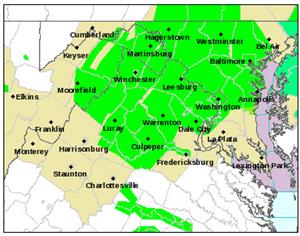 UPDATED 5:45 p.m. Friday: Several hours of torrential downpour in the D.C. region have dumped more than 4 inches of rain on some areas, causing creeks and streams to swell, street closures,  traffic delays and flooding .

There is a  flood warning in effect until dinnertime for much of Northern Virginia and parts of Maryland.

There are also flood warnings for small streams across the listening area.

The skies have begun to clear as the rain moves off the coast and highs should move into the low 70s this afternoon. 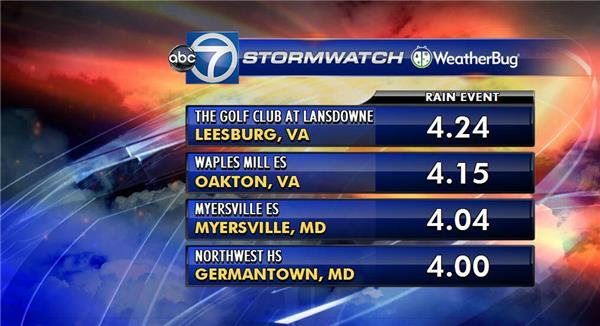 With some areas seeing large amounts of rain, flooding remains a major concern especially with small streams, rivers and urban areas that are prone to flooding. In Georgetown, the Potomac River is expected to crest at 10.7 feet by Saturday afternoon, which is several feet above flood stage.

Other rivers expected to crest well above flood stage Saturday include the Rappahannock near Fredericksburg, Goose Creek near Leesburg and other points along the Potomac including Point of Rocks and Little Falls.

Expect it to be pretty breezy this afternoon as well. By Friday night, clear skies will take hold and temperatures will fall into the lower 50s.

The weekend is looking PHENOMENAL, with daytime highs in the lower 70s and partly sunny skies Saturday. A few isolated sprinkles are possible through the afternoon. Expect a few more clouds Sunday.

Get the full forecast on WTOP.com.

There are a number of road closures and signal outages around the region because of crashes and flooding.

Below are notable traffic/commuter complications:

-U.S. 1 has reopened at Telegraph Road.