Osprey versus Maryland: The nest battle

Osprey versus Maryland: The nest battle 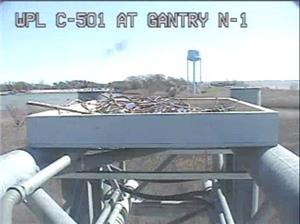 MDTA
WASHINGTON -- The persistent ospreys have a more permanent nest option away from traffic cameras now that a platform is in place Thursday morning.
The platform was secured in the area of the Bay Bridge at about 10:45 a.m. Thursday. It came after the federally protected birds returned and built another nest Wednesday afternoon -- but this time in front of a different traffic camera in the same area.
The Maryland Transportation Authority says from noon to 12:15 p.m. Monday through Thursday that its osprey cam will be pan and hold on the nest so people can watch the female osprey.
The birds built three different nests on a gantry in front of a camera facing the eastern span near the Bay Bridge and each time the Maryland Transportation Authority destroyed them. MDTA continued to remove the nests because they were blocking the camera.

On Wednesday afternoon, the birds rebuilt a nest, but on a gantry facing the western span near the Bay Bridge.

“He’s pretty much on the same gantry, but it went from eastbound to westbound and once again found its primary nesting place in front of another traffic camera,” says Tamory Winfield, the public information officer for MDTA.

“I can safely say this wasn't expected from anyone,” Winfield says.

John Sales, MDTA spokesman, says the camera has captured images of the birds attacking the camera, which would cost roughly $6,000 to replace. The cameras help MDTA stay informed about traffic issues and dangers on the roadways.

On Tuesday, the area where the ospreys had been building a nest was examined and a wildlife expert said the platform was a good solution.

Craig Koppie, a raptor biologist with the U.S. Fish and Wildlife Services' Chesapeake Bay field office, said the platform moved them not only from the camera, but to a safer spot entirely. Earlier they were right above the signage for the Route 50 Expressway.

"We're basically going to entice the osprey pair to move over. Because they are going to see that the new location, the new added structure, provides what they need on a flat surface," says Koppie.

The new spot is only 15 feet away and Koppie says he is confident the spot will be more appealing to the ospreys.

"[The birds] know that they're dropping their sticks when they're trying to weave them into a small little bracketed area," he says.In addition to keeping the birds from the camera, it will be safer for them and their future chicks. When they start to fledge and leave the nest, they will be closer to the shoulder."They're going to have an ample area to go to and not just literally fall off on the road possibly."
Ospreys, like all migratory birds, are protected under the Migratory Bird Treaty Act. But their nests can be removed from some structures without a permit as long as there are no eggs or birds in the nest.