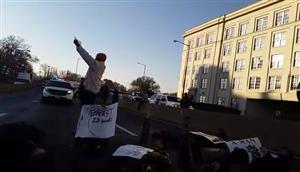 Protesters lay in the streets Monday. (Courtesy U Stream)

The protesters disbanded by about 9:45 a.m. after they blocked streets and caused major delays through D.C. for more than an hour.

This isn’t the first time protesters opposing the Ferguson, Missouri, grand jury decision have snarled traffic in the D.C. area.

On Sunday, protesters blocked traffic on the Southeast-Southwest Freeway of Interstate-395.

The D.C. Department of Transportation reported the highway was closed Sunday afternoon near the 3rd Street Tunnel. Images online showed a line of protesters holding hands, blocking traffic in both directions. Police were on the scene.

The highway was reopened to traffic a short time later.

On Saturday, protesters blocked streets in the busy Georgetown neighborhood and in the Pentagon City area of Arlington County.

The protests remained peaceful and nonviolent.

“On Monday, Dec 1st people around the country will be walking out of their schools and places of work in solidarity with Ferguson communities across the country effected by police violence,” the event’s website says.

Similar demonstrations are planned around the country – including ones in McLean, Virginia, and Baltimore.

Get the latest events, photos and updates in the live blog below.